Cailleau Herboristerie is, first and foremost, a family-run herbalist business, which started out growing medicinal plants in the 19th century, in a region that was already very promising in that domain. 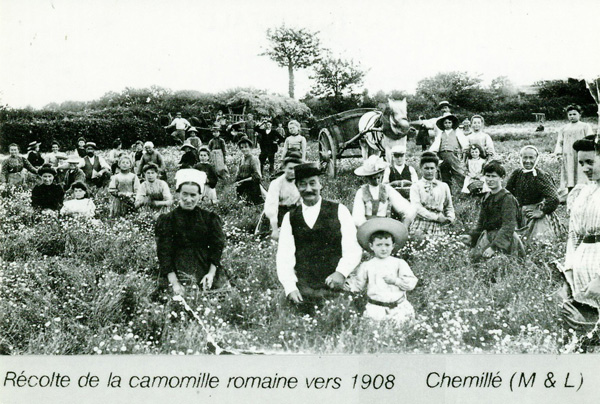 The year of the oldest account book found in our archives. It reveals the production of four plants – Roman chamomile, mint, hyssop and lemon balm – which we would continue to sell up until 1930.

The number of species grown increases, while wild plants begin to be gathered to supply herbalists who are prospering from a flourishing trade. Therapeutic formulas start to be sold, some of which still appear in our catalogue today.

During the Second World War, business slows substantially, but the plants are preserved in the meanwhile.

In 1941, the world of herb trading is shaken when the Vichy government eliminates the herbalism degree in France. The distribution of plants falls under a pharmaceutical monopoly.

Construction of a first building for the business. Marketing begins to take place throughout France.

A fire destroys the building.

Reconstruction and creation of the first workshops containing cutting, crushing and sizing machines. Installation of a heated air drying unit in addition to the traditional open-air dryers, as well as a new essential oil extraction workshop for Roman chamomile, our region’s most emblematic plant.

The Cailleau family has big plans and develops exports to other French-speaking countries.

Acquisition of an IMA packaging machine, completely automating the production of boxes of tea in bags. Acquisition of machines to produce capsules.

The company modernizes by installing a computer system. Creation of our testing lab.

1989-1990: A turning point in world history with the fall of the Berlin Wall, but also a turning point for many companies’ exports, including Cailleau Herboristerie, as we re-established relationships with plant suppliers from Central Europe.

Creation of a line of essential oils.

Attentive to our clients’ needs and the prevailing trends, Cailleau creates an organic range of plants.

Creation of a new cutting workshop.

New method for managing raw materials and storage, with the implementation of a computerized system. Improvement of the crushing process with the acquisition of new equipment yielding better productivity and bacteriological quality of the plants.

Yves Cailleau passes the torch for Cailleau Herboristerie. The company takes a new direction with Mr and Mrs Brard at the helm. With more than 25 years’ experience selecting seeds and excellent knowledge of the agricultural world, Cailleau returns to close collaborations with its growers to emphasize “made in France” products which the new owners feel is better aligned with their goal of offering only the highest quality of plants.

Launch of the new line of organic aqueous macerates.

Jordan Brard joins the company to revive its business development and keep its family torch alive.

In the interest of enhancing its team’s comfort, making the company more accessible, and meeting the industry’s increasingly demanding production standards, all while using environmentally friendly equipment, Cailleau decides to build new constructions so all of the company’s workshops and services can be together on the same site.

Relocation to the new premises. The company is now based in Actiparc business park, in a booming area close to the motorway.

Launch of the new range of gemmotherapy products, syrups and sprays.

Cailleau Herboristerie’s attentiveness to clients and focus on the future, combined with its ancestral know-how, becomes the key actor in the French herb trade.